By: Larry Asberry, Jr. aka Bluemanrule

First person shooters and Cyberpunk futures saturate and often overstay their welcome in the gaming world.  Starbreeze as a developer has a reputation for spicing up the mundane and implementing unique gameplay features.  Syndicate is no different in that it overlays new gameplay elements in a well-lit Cyberpunk future imaging by the thoughtful developers.  The result is a bright future.

Before we begin, Syndicate is a reboot of a 1993 game.  The development team voiced its intentions early on that it wanted to retain the heart of the original franchise and modernize the experience.  My intentions are to relay to you the quality of this game in its own right.

It’s 2069 and countries no longer separate the world.  Huge corporate conglomerates called Syndicates own and control various regions across the world.  These syndicates all sell implanted computer chips that allow people to access the world around them. Data, currency, and identification all rely on these chips.  For these corporations, the militaristic capabilities of these chips keep them competitive in the marketplace.  There is an underground struggle for powered balanced by gunfights, ambushes, invasions, abductions, and all other forms of organized aggression. 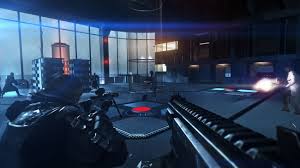 You play as Miles Kilo, one of the underground regulators in 2069. Employed by Eurocorp, Miles fights to keep the company’s intellectual  property safe and that’s where the fun beings.  Using his superior implant, Miles opens doors, diffuses grenades, and breaches enemy chips to garner a strategic advantage.  The Backfire skill damages enemies and makes them more vulnerable for a short period of time. Persuade, another skill, encourages enemies to switch sides and ultimately kill themselves.  This is very reminiscent of the predecessor’s Persuadatron ability.  Sounds like an interesting story would take place around all these stategic elements  right?

The story is perhaps the game’s weakest part.  Traditional storytelling conventions involving plot twists and things not being what they seem rear their ugly head.  It’s a shame really because Starbreeze succeeded in making the game look and play different from many in its genre. If Starbreeze exerted the same amount of care and effort into this story, it would feel revolutionary rather than evolutionary.  That being said, it will keep you moving through rapidly so and is coherent.

The universe is a deep one with very interesting backstories.  Competing Syndicates have a history, as do their most valuable personnel.  You can access this information by listening to news reports, transferring data and finding collectible electronic busts throughout the game.  The problem is that the text is so small, you will find it very disconcerting attempting to read the information.  I have a 60″ HDTV and after reading text on a PC screen all day at work, I could not bring myself to read any more on-screen text despite how interesting it may have been.  An audio codex with audiologs would have alleviated this issue.

Don’t let that deter you though. Despite all the criticisms of the boss fights, I found them to be a nice reprieve from the corridors of grunts to work through.  Playing the game on normal difficulty often feels unfair as I died many times without knowing the why or where or whom.  Ultimately though, the game felt very balanced and once you master its combat rhythm. The rhythm of using skills, evading, and shooting makes cutting down a crowd of 8 people a mediocre challenge.  The cooperative mode more than makes up for the single-player. 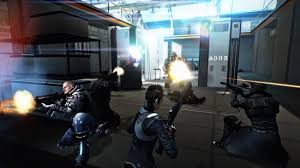 You and three other friends are agents from a separate Syndicate.  You tackle  nine (9) missions from maps lifted directly from the original Syndicate released in 1993.  It’s a very smart and well-executed homage to the original idea and works fabulously. The variety of layouts and vistas is awe-inspiring and each pose their own challenges.

As an elite agent, you level up and acquire new skills similar to those found in the campaign.  Difference is, these are much cooler.  E-Drain allows you to gain 50% of damage dealt as health.  Focus breaching, infinite sprint, regeneration boost, emergency resuscitation and many other skills round out the upgrade paths.  Weapons are also upgradable and, accompanied  with customizable loadouts, this is where Syndicate begins to show its depth.

As you complete each of the nine (9) cooperative missions, you earn tokens.  These tokens allow you to unlock skills and weapons for research.  Then, as you play each mission  researching those unlocked skills and weapons, you gain experience points.  Once you acquired sufficient experience points, you acquire the researched upgrade.  You can queue one research project at a time so if you level-up mid-mission, the queued research projects garner the accumulated experience points for the duration of the mission.  Thanks to weapon research, my magnum has a red dot sight and is more powerful than most shotguns.

You can choose either an offensive, defensive or support role. How you classify yourself is not as important as the role you play in coop.  Squad heal and damage shielding skills really support the team. E-drain, persuade, and focus breach are more aggressive skills and are usually equipped in the offensive roles.  However, if your team has no behavioral strategy in place before the firefight begins, there may be a lot of hurt feelings in your friend circle.   Provided you can get the multiplayer to work.

My entire play group encountered constant server connection issues.  We would be kicked out of games, lose experience/research points, and be forced to hard reboot our 360 consoles constantly.  This happened to me 7 times over the course of two nights.  Starbreeze discovered that the temporary solution involves using the  Game Chat feature and not the Party Chat feature offered by Xbox Live.  This worked for about three hours on Friday evening and then the problems returned.  Hopefully a forthcoming patch fixes that issues because  forced reboots on sensitive Xbox 360s are heart-wrenching to those who have endured Red Rings of Death. 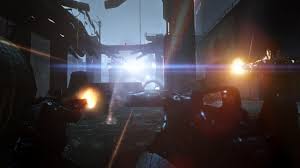 Clan creation augment’s the multiplayer’s depth.  You can create a clan called a Syndicate.  Starbreeze gets real cheeky with the corporate structure by appointing the clan creator CEO.  Only the CEO can invite others to and promote players within the clan to board members.  Board members can then recruit other members to the clan.  Clans are graded against each other via the in-game stock market.  The quality of your clan is directly reflected in your stock market assessment.  You can assign a logo and three character tag to your clan.  Once established, you are an official, unique Syndicate in this world.  I think that is brilliant.

Summarily, Syndicate is a good single-player experience with a fantastic cooperative structure.  It is built around intelligent, structured gameplay mechanics and looks good doing it.  The depth and variety of the upgrade tree contributing to varying play-styles encourages you to keep playing.  The game’s lore could have been presented in a cleaner, less text-heavy manner and the no-party-chat limitations makes talking to your circle about this great game problematic.  Aside from that, Syndicate’s immensely entertaining cooperative structure is like few I’ve experienced before.  It is a must play.